In this article, I’ll show you how to easily unlock YouTube the biggest video sharing site right on your Android device if it is locked. However, I’ll show you the best rated Android apps by Google Play users in this article. With the following best YouTube Unblocker Android apps you will be able to unlock YouTube video sharing site on your Android smartphone/tablet without any hesitation. But you can now unblock YouTube without any third-party proxy site.

If You are in a region where YouTube is blocked.. then this app is for you because it will easily help you unblock YouTube on your Android smartphone/tablet once you installed this app. Enjoy every time everywhere. 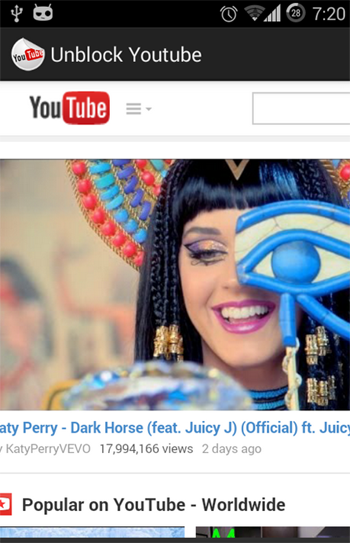 YouTube is blocked in Pakistan and those who are looking to unblock it on their Android smartphones/tablets then just install Youtube Unblock Pakistan Android app.

To provide uninterrupted streaming for YouTube. This application has simple friendly interface just click and watch your favorite videos without any interruption.

However comment below if you know any Android app that works well but you didn’t find that app in the list above. Kindly let us know about that application.