RealCalc Scientific Calculator is a fully featured scientific calculator which looks and operates like the real thing. Looking for fractions? Degrees/minutes/seconds? Landscape mode? Then you should read this application? Because it can do more better things for you to solve mathematical problems, traditional algebraic or RPN operation, result history, unit conversions, percentages, physical constants table, 10 memories, binary, octal, and hexadecimal (can be enabled in Settings), and more. RealCalc Scientific Calculator Android app also includes trig functions in degrees, radians or grads, scientific, engineering and fixed-point display modes, configurable digit grouping and decimal point, and everything that you need in your maths problems. 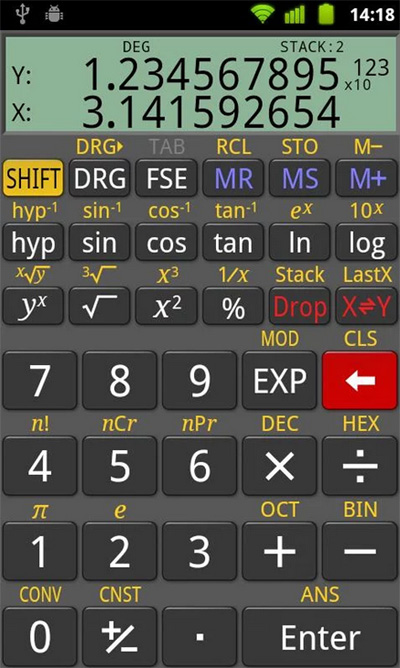 Scientific calculator is an Android app that have 11 computing modes in one single application + a handy scientific reference section. Here are the modes that are included in this Android app to function correctly in Android device.

Kindly, watch this video to know more about this scientific calculator Android app:

Calculator++ helps you to do basic and advanced calculations on your Android device to help you in every possible way to resolve mathematical problems within seconds. You can check angle units and numeral bases: integration, trigonometric functions and complex number computation work only for RAD. However, for development reasons, this application contains some ads (but not malicious ads).  If you wanna remove the advertisement from the application interface then you should purchase special option from application settings. Internet access permission is needed only for showing the ads. ADS ARE ONLY SHOWN ON THE SECONDARY SCREENS! To watch video click here.

AC scientific calculator works like awesome and gives you the final accurate results for any question you ask from it on your Android device. Before that this application was known as calcAndroid but now it have redesigned + modernize with great scientific calculator functions that students of engineering, physics departments need.

The Panecal is an editable expressions scientific calculator. The Panecal can indicate expressions on a multi-line display, allowing you to prevent input mistakes. In addition, moving the cursor on the display can easily modify expressions. Below are a couple of great features that Panecal Scientific Calculator Android app gives.